Today is a very remarkable day for football history. Exactly 155 years ago, Nathaniel Creswick and William Prest founded Sheffield FC, the world’s very first club to play by the rules we know today. In the beginning of football, the sport was very much linked to rugby and many clubs played by both rules. Today, Sheffield FC – having remained an amateur club throughout its entire history – celebrates its 155th birthday with a modern social media campaign. Inspirator Robert Zitzmann of UFA Sports revealed some of his aims for “Der Medienlotse“. 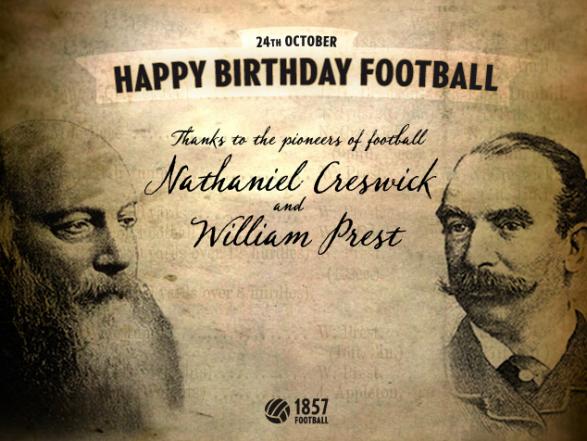 “Our campaign is called ‘Happy Birthday Football’ for football fans all over the world to celebrate the beautiful game”, says Zitzmann. Sheffield FC aims to become the second-most beloved football club of every lover of the game. Unlike Premier League clubs, the team is run by a foundation and has engaged in numerous CSR activities over the last years. Most outstanding, “Boots for Africa” brings used European football boots to enthusiastic kids in Africa, which was backed by Didier Drogba for example. Moreover, UEFA and FIFA have recognized Sheffield FC of one of the founders of football.

But let’s take now a look on the Social Media Campaing by Zitzmann: Facebook Page , Twitter Hashtag, YouTube video, a campaign website plus a press kit are all ready to be shared, but most interestingly the club’s name isn’t very much used. This may be according to the club’s modern culture, but hints to more prospects to the combined “Happy Birthday” and “Football Pioneers of 1857” campaign. As we all know, other Englishmen than Creswick and Prest travelled the world and introduced the game around the globe.

Interestingly, the campaign uses standard social media tools like a tweet counter or Facebook’s like button to measure its success, but passes to inject viral videos or even gamification. There might be more to come in the future, according to Chairman Richard Tims: “We want to make this day ‘World Football Day’ every year.” As a true lover of the sports and a sport historian myself, I can trace back my fandom to the days of October 1857 and therefore acclaim: Happy Birthday, Sheffield FC! Thanks for your ingenuity!