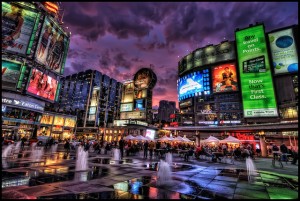 The newest toy for global leading cities in their struggle for public recognition is the term „Smart City“. Companies like CISCO and others are eager to sell their smart urban visions to mayors worldwide and are looking forward to a 400 billion $ market. Smart cities come in two flavours: recently planned and built like Songdo in South Korea or establishes ones like Boston, London or Hamburg. But why do politicians love the idea? And what’s in for the citizens?

Cost efficiency and good PR
London has been on the global landscape for a while, but experienced a rise in recognition after the 2012 Olympics. More and more tourists flock into the city, which grows each year twice as fast as the rest of the UK. Many of the new Londoners rely on the tube to travel for leisure or work. But the tube system is over 150 years old and a major renovation would result in a massive economic loss. An Arte TV documentary showed, how sensors and new pricing methods enabled the London Underground Company to put more efficiency into the Victorian system. The digital components help to orchestrate the constant arriving and departing of the tubes, so that the stations don’t get too crowded. Prices are increased for peak time and detain poor or spontaneous travellers. By these means, the system became 30% more efficient.

Boston also used sensors to optimize their sewer system. The authorities now know which sewer needs to be repaired and can predict the sustainability of the whole system much better. Hamburg plans to use sensors in street lighting and roads in time for the 2015 World Ports Conference and help companies in the harbour area to use the existing space more efficient. With the dawn of the Internet of Things, more and more sensors will be implemented in our surroundings. One might speculate with Moore’s Law in mind, that sensors will become so cheap and intelligent, that they can almost be used for any thinkable measurable purpose and attached to almost anything around us – even living creatures.

Safety versus supervision versus privacy
But saving money isn’t the only advantage of smart cities. Newly ones like Sengdu offer their citizens almost ultimate safety. Cameras overlook every junction and parents 24/7 can check playgrounds. The Koreans are already pitching their city model to other Asian countries. China and its formed society are very open to smart city concepts, too: Citizens can use key cards to open their homes, pay in the supermarket or collect bonus points for voluntary work in the subway. All data is centralized by companies, who can easily check if the old lady in the basement hasn’t left her home for a couple of days. Within seconds, medical services or the caretaker can be alerted and check on her health. But each and every new technology can be used in a different way: If the former drug convict frequently receives new visitors, the police might want to check on him, too.

Sadly, most smart cities rely on camera work. Foremost London and the UK are the No1 worldwide when it comes to CCTV footage. Some citizens might be willed to trade safety for privacy, but many people around the globe have become sceptical after the Snowden revelations about the NSA. Ironically, things continue to be the same. We use our mobile phones in public hotspots and tend to believe, that no one is fetching our data. Topics like data preservation are currently very hot on the political scene and might be implemented rather sooner than later after the Paris attacks. But what if not only our mobiles collect data, but the city we live in? Dystopian visions are becoming true, after all, it seems.

Smart Power to Smart Cities
The entertainment industry was the first to be hit by digitalization, automotive and power companies might be next – and this might be after all good news for all citizens. US economist Jeremy Rifkin believes that smart power grids are they key for the future of smart cities. The end of power centralisation in plants might even evoke the end of capitalism, when each and every houseowner produces energy (with solar panels or small windwheels on the balcony). Smart grids are needed to store and deliver energy where it is needed. But even in big cities the weather tends to be the same and if the sun weren’t shining, nobody would be able to heat their flats.

Thinking in an even bigger picture might help. What if smart cities entirely ban combustions engines and use electric vehicles instead? This would not only decrease pollution and noise, but also give more space back to the citizens: new studies show, that a shared car can replace eight cars for individuals (and why exactly do we carelessly waste so much public space and don’t charge much higher parking fees?). Electric vehicles need energy, too – and what if the houseowner’s energy would be directly implemented onto inductive roads? The Fraunhofer institute thinks that by 2030 vehicles might be charged while driving. The problem of too much power at peak times would be solved, if cars would become moving power repositories.

What do we want?
In my opinion, we want smart cities, which do not only offer security and safety, but are more experimental. First of all, smart cities don’t need to be efficient. Smart cities need to be green and environmental-friendly, free of unnecessary traffic and pollution and open to people from all around the globe. Rifkin believes, that we have to fight for that vision to come true. We have already experienced, what happens to our private data, when it’s centralized in the hands of governments and companies. Smart cities produce even more data, and both politicians and entrepreneurs are keen to use that, too.

If you would like to join the discussion on smart city or add yet another utopian or dystopian explanation, feel free to post your comment below. Thanks!

tl;dr
Smart cities are a great vision for the future. But we have decide ourselves, in which city we want to live: A secure and safe one or a creative and green one?