Media and sports have always enjoyed a love-hate-relationship. Both need each other, but the pendulums seems to swing in favor of the clubs, as the recent snubbing of Schalke towards the ZDF and their unwillingness to show a final Champions League encounter or the long public silence of Mario Götze has only been relieved in an interview for paying customers of Bayern TV. Our guest author Aaron Syed Jaffery (@aaronjaffery) is Managing Director of digital sport consultancy NineteenEightyFour and examines how players can benefit from the ongoing battle.

One thing is clear.  Social has opened up a dialogue between fans and their idols more than any other medium that came before. But in this ever-more digitally integrated world, who really holds the power in connecting with the fanbase?

Clubs v Publishers
Social has changed the relationship between clubs and their fans, and has prompted the evolution from club media departments from being PR focussed to becoming content driven publishers. This has manifested itself in a trend for clubs to try to control the flow of fan-communications by making local press officers feel less than welcome than they may have done previously.

Perhaps naively, clubs believe that this action can protect their brand from negative publicity, and that fans are more interested in what the club has to say than the local press. However, the independence of the press has won countless battles to restrict freedom of speech throughout the centuries, and there’s little doubt that the outcome of this little spat is likely to be in the favour of the insightful and truthful journalism.

However, whilst the impact on club communications has been large, the greatest impact of social is perhaps in connecting fans with the everyday lives of their idols – the players. Whilst the basis of the relationship has changed since it was commonplace to find stars having a pint in their local public house, social has opened a communication channel that has been closed since the financial monolith of the Premier League opened its doors for business in 1992. 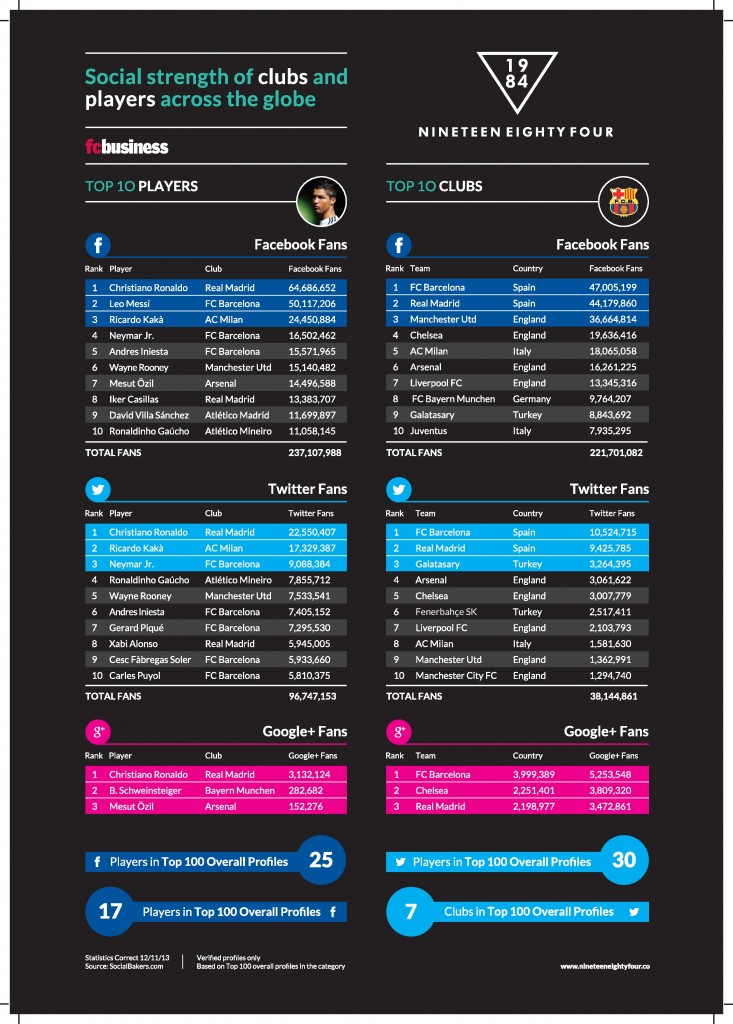 Player Power
Our research suggests that fans are far more engaged with individual players than they are with clubs.  On both Facebook and Twitter, the number of fans connected with individual players outstrips those connected with a club. Understandably, the difference is largest on Twitter, which is a more immediate and individual communications stream than Facebook. Out of the Top 100 Sport profiles on Twitter, only 7 are football clubs, whereas 30 are player profiles. A similar trend can be seen on Facebook, where only 17 of the Top 100 pages are football clubs, whereas 25 are players.

Another striking trend is the huge influence of the Spanish giants Barcelona and Real Madrid. In a clear nod to the global focus of each clubs brand, the El Classico pairing enjoy the largest followings in terms of pure reach across all platforms, and 9 of the top 10 players on Facebook and Twitter have current or past associations to each club.

In some instances, individual players have a greater following than the clubs they represent. Both Cristiano Ronaldo and Leo Messi have a larger Facebook following than their respective clubs, and on Twitter, Ronaldo’s following figures are nearly as many as FC Barcelona, Real Madrid and Galatasaray combined.

Leveraging the opportunity
Given the relatively short shelf-life of a player, are they making the most of the new opportunities afforded to them by digital media? Well one look at the digital footprint of the top 2 socially followed players, Ronaldo and Messi, suggests not.

Beyond their social presence, the use of digital media by the management teams of most players is far from complete. Personal websites and content planning can add significant value to a player’s perceived value, as they strengthen the connection with the fan. This can provide additional endorsement opportunities, and metrics can clearly illustrate to brands (and clubs) the engagement that a player achieves with their fans.

Similarly, are clubs utilising all of the channels in their control? Well clearly, players on the payroll are a key communication outlet for clubs, and yet very few have a strategy for dealing with this. Players often have unbranded social feeds, and there is no requirement on a player to promote club activities on their channels.  Social media policies are still relatively new to many clubs and are mainly aimed at trying to stop indiscretions rather than leveraging the social influence of their players.

Unexplored frontiers
So it’s pretty clear – fans are more likely to engage with players than with clubs. This is natural, as the behavioural psyche aspires to be more like individuals, not brands. However, player power lasts for only as long as their career allows, whereas clubs live on.

There are, understandably, still unexplored opportunities for both players and clubs to make the most of their potential digital footprint.  And, with a potential situation where a players digital presence is a major driver in the valuation of their image rights not too far away, digital channels are sure to make the already complex matter of contract negotiations even more protracted.