Every time I visit the UK the people seem to be in awe of the recent developments in the Bundesliga. Mostly, the Champions League final in London between two German sides (Bayern and Dortmund) fuelled that notion, but when it comes to turnover and tradition the Premier League still beats their counterparts from the continent. Both countries have met in some classic football clashes over the decades, but developed quite differently in their football culture. Most prominently, the so-called “50+1”-rule sheds the tide and is often interpreted as a German anti-Abramovich/Glazier move. In this post I therefore would like to detect if the rule adds any commercial value.

Although the Bundesliag is heading “towards Spanish affairs”, with Dortmund and Bayern already battling at the top again and the rest of the league lacking behind, the officials of the DFL are very much in love with the idea of solidarity and unity. This often led to very conservative and non-commercial decisions (all clubs are marketed together for TV) and a specified “50+1”-rule, which states that investors cannot overtake the majority, which has to remain with the non-profit arm of the club. This doesn’t necessarily means that clubs in Germany are fan-owned. The crowdsourced project of running Fortuna Köln recently failed and companies like Volkswagen, Audi, Bayer and adidas are club shareholders.

But “50+1” was never a stronghold in Germany. Leverkusen (Bayer) and Wolfsburg (Volkswagen) are granted exceptions due “to their tradition” and Hoffenheim is in fact controlled by SAP founder Dietmar Hopp. In the lower leagues, RB Leipzig was forbidden to use the name “Red Bull”, and opted for the similar sounding RasenBallsport (lawn ball sport) and is – of course – fuelled by Dietrich Matteschitz’s money, who wants to push the club from the underrepresented eastern part of the country into the top flight. In the past years, the chairman of Hannover 96, Martin Kind, strongly advocated for another modification of the “50+1”-rule. He now successfully convinced the DFL that 20 years after their first investment investors can in fact take over the majority.

But let’s move back to the initial question. Do the 50+1-clubs from Germany have a bigger turnover than their rivals from the British Isles?  No, if we look at the figures across Europe’s Top 5 football leagues (turnover in million €): 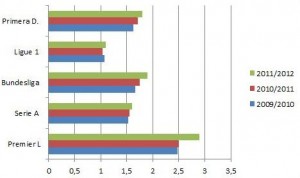 If we look at the average attendance in Europes Top 5 football leagues, we see a different picture. At the beginning of the new millennium, the Premier League attracted most fans. This changed dramatically after the 2006 World Cup in Germany, when the stadiums in the twelve host cities were re-built or renovated and many other clubs from non-host cities like Düsseldorf or Wolfsburg followed. Since then, the Bundesliga pushes the record year by year even further, as the overall attendance charts shows below: 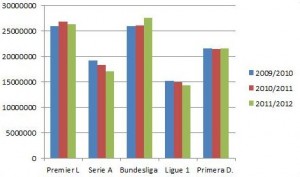 In overall attendances, the Premier League isn’t that much lacking behind the Bundesliga. In 2010/11 the attendance was 26.8m and 26.1 million in Germany.

But the record of the Bundesliga looks even more impressive, because all other four leagues consist of 20 clubs and play 720 games over a season, compared to 18 clubs and only 612 games. This chart shows the average attendance development in all five top leagues: 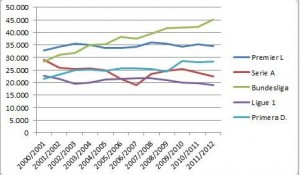 If we set the data into relation, we again see a different picture. The Bundesliga attendance record is worth nothing, because the Premier League maintains its lead when it comes to turnover/match.

The figures get even worse for the Bundesliga, when we look at the turnover per visitor.

In fact, all other four leagues make more from each fan than the Bundesliga. The reason is simply explained – the Bundesliga is by far the cheapest league to watch:

Apart from stepping up in the commercialization abroad, where the Premier League takes home roughly 500 million €/year and the Bundesliga wants to make 100-150 million €, the Germans have to take different measures when it comes to pricing. Having said earlier that the DFL very much looks into the idea of unity and is – like most other important German institutions – fuelled by a fear of a changing public opinion, so nothing will change soon. League officials often defend the low pricing with the argument that the 18 clubs from the German top flight earn the most in Europe from sponsoring. If the average attendance drops when prices are increased heavily, sponsors are most likely to pay a lot less to the clubs. On the other hand, DFL and clubs strongly oppose bengal fireworks within the stadiums and have more than once threatened to ban standing areas completely as a result.

With this in mind we can answer that “50+1”-clubs look competitively when it comes to attendance, but lose pace in commercialization. Even in debt-ridden countries like Spain and Italy the fans are asked to pay more to see their clubs live. On the other hand, “50+1” might exactly be the reason for the lower pricing of the Bundesliga. On the long term will show if the DFL’s bet will pay out. Already a whole generation in British football support is missing due to the high pricing in the Premier League. If you watch the Bundesliga any given Saturday, you will see a lot of young faces in the stands behind the goal and many families enjoying their team playing.

Therefore the Bundesliga has to look for other monetization options. In my next blog post I will take a deeper look into the Bundesliga’s digital potential.