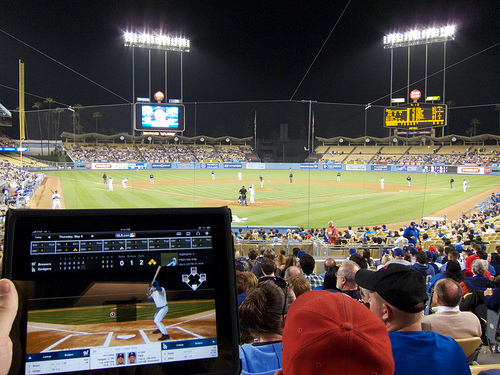 Our world spins faster every second and so there is no end to the digital change yet. Especially journalists and print products have struggled over the last two years to fully understand the dramatic shift in user attention and spending. The Medienlotse paints his picture of the media world in 2015 and tells you what will have become mainstream by then.

Say goodbye, journalists…
Did you know, that as many people play mobile games as there are registered at Facebook? Almost 1bn people enjoy playing on their PCs, consoles, TVs, smartphones or tablets With the world’s largest social network only stagnating, other services have conquered the attention and spending power of mobile users. Why is this connected to the future of journalism? First of all, our complex world has less time at its command after each new digital innovation. Info networks like Twitter trended at exactly the right time and now it’s required to sell your headline in 140 characters (or less) or just under six seconds (Vine). But journalists keep ignoring those facts.

Two, with a smaller time budget we now select more carefully where we draw our attention as users and consumers, sometimes to the disadvantage of traditional media like press, TV or radio. Games or infotainment have become as popular as news shows or long editorials. We now believe in the power of brands and celebrity individuals, who tell us how to do our workout or live a healthier life. Third, our world is entertained 24/7 and hardcore political-stories on the reform of the health system attract fewer readers each month. What we want to know are the results, not the backdoor hassle between grey lobbyists and dull politicians.

Welcome the new world of digital media
Keep these developments in mind, because they will have shaped our media by 2015 completely. Traditional newspapers who gather national and local news will continue to lose and be substituted by individuals, blogs or new journalistic projects with a local fanbase. Nationwide media survived for the time being, but they have abandoned quick news like “Federer wins Wimbledon a record time” or “DAX on the rise to 8.000 points” completely. Numerous web news service now fight the bloody battle for attention and advertising money.

Some journalists have abandoned the sinking ship right on time and established themselves as media brands with long analysis of political or economic development. Users are now willing to pay for this content, but are likely to get stuck in the “filter bubble”, because they will only read what they already know or like. The fans will follow their journalists from magazine to magazine or from platform to platform, if these individuals manage to appear transparent and competent over a long period.

In 24 months the web has eaten away big chunks of time spent watching TV. German publishers Axel Springer successfully drove viewers from the traditional Bundesliga TV show on ARD to their digital services, which are available 60 minutes after the final whistle blew. Users can draft their own Bundesliga video show and pick between “just highlights” or “full match report”. If they don’t like what they have just watched, they can easily get in touch with the match report team. Naturally, new services will come with a close link to social networks, which fuels them with even more attention and sponsors.
Author: Jan C. Rode